John Arthur Joule was born in Harrogate, Yorkshire, England, but grew up and attended school in Llandudno, North Wales, going on to study for BSc, MSc, and PhD (1961 ; with George F. Smith) degrees at the University of Manchester. Following post-doctoral periods in Princeton (Richard K. Hill) and Stanford (Carl Djerassi) he joined the academic staff of the University of Manchester where he served for 41 years, retiring and being appointed Professor Emeritus in 2004. Sabbatical periods were spent at the University of Ibadan, Nigeria, Johns Hopkins Medical School, Department of Pharmacology and Experimental Therapeutics, and the University of Maryland, Baltimore County. He was William Evans Visiting Fellow at Otago University, New Zealand.Dr. Joule has taught many courses on heterocyclic chemistry to industry and academe in the UK and elsewhere. He is currently Associate Editor for Tetrahedron Letters, Scientific Editor for Arkivoc, and Co-Editor of the annual Progress in Heterocyclic Chemistry. 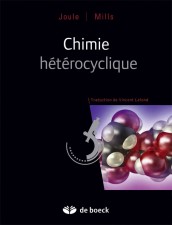